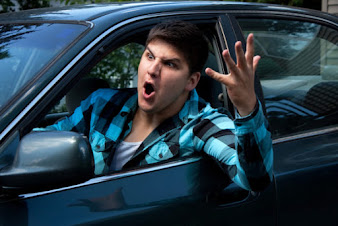 On my drive up to Bridger Bowl this Monday, I found myself in the midst of a simple miscommunication that sadly resulted in a very angry man hanging his head and his middle finger out his window and shouting in a violent tirade. Fortunately, I wasn’t able to hear the specifics of his outcry, but while I’m not a professional lip-reader, I’m assuming the words he was screaming would not be appropriate for me to share with you all.

It was about 9:15am on Monday morning, so I found myself in the long line of skiers making their way to the mountain. I wasn’t in a hurry (like some people often are) and had no desire to pass the cars in front of me (like some people often do). But suddenly I noticed that the car in front of me had drastically slowed down and the driver had extended his hand from window and appeared to be waving me on to pass. I checked to make sure it was safe and then quickly skirted around him.

But I quickly realized that he hadn’t been waving to me, but was signaling to a plow truck that was waiting to merge into the long line of traffic. I tucked in behind the plow to contentedly and patiently continue my journey to the ski hill, but not before being presented with a barrage of angry words and actions from the man I had passed. And I mean a vein-popping, red-faced sort of ANGRY. This guy was SO MAD. And he offered the same furious gestures to the two vehicles behind me that misunderstood what was happening and passed him as well.

The thing that shocked me most about this encounter, however, wasn’t the content of his tirade, but how quickly and instinctively it emerged. He didn’t have to mindfully and intentionally conjure up his response. He didn’t take a moment to process his emotions and then react accordingly or appropriately. He just erupted, without hesitation.

Which means that this man’s life has cultivated a spirit of frustration and anger, emotions that sit bubbling, just below the surface, ready to explode at any given moment. And I’m really not trying to judge him, because I do the same thing at times. I’ve never found myself screaming obscenities out my car window (or using my middle finger in that sort of way), but I certainly react poorly and regrettably at times. Maybe he had a really bad morning. Maybe he has a family member who is sick or struggling. Maybe he’s suffering from relational or vocational stress. I totally get it. But for whatever reason, he hasn’t cultivated a peaceful and generous spirit that will emerge as kindness and love in his moments of anxiety, pain, and struggle.

We all foster a certain lifestyle that will naturally rise to the surface in our moments of crises or uncertainty, for better or worse. Jesus says it this way:

Whatever we’re nurturing—whether grace, peace, generosity, and love; or judgment, anger, greed, and hatred—will dictate how we react and respond to the onslaught of encounters we experience each day. So, let’s make sure we’re doing the hard work, up front, of cultivating a righteous spirit that will subconsciously emerge as forgiveness, generosity, peacefulness, and love when we’re faced with trying situations. Let’s make sure that what we’re storing in our hearts is the sort of thing we’d want bubbling to the surface—because it surely will.

Posted by Jason Bowker at 8:57 PM No comments: