Thoughts on the Penn State Scandal 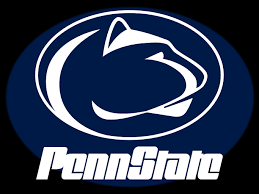 If you have, in any way, been tuned-in to the sports world over the past week, then you have assuredly heard about the breaking news of sexual abuse and cover-up at Penn State University over the past decade. Am I'm sure you have an opinion. There are a million angles a blog post on this subject could explore, but there are two issues I will address in this post.

Firstly, I have been pleased to see all parties involved in this scandal (the president of the school, the athletic director, coach Joe Paterno, & the assistant coach who first witnessed the sexual abuse 12 years ago) removed from their positions. While people losing their jobs is rarely a good thing, and part of me is extremely disappointed and saddened that Paterno's career will end in this way, I feel that these firings needed to take place as an act of solidarity with the victims. I can only imagine the horrors of sexual abuse and cannot fathom the pain that the victims of these heinous crimes are enduring as they relive the traumatic events of their past. I am happy the Penn State board of trustees has taken this first step in siding with the victims, even if the reputation of their beloved coach is tarnished in the process. 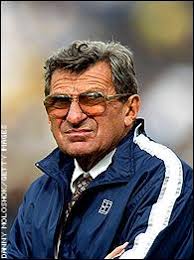 The second issue that I deem worthy of discussion is one that I have heard only a few people write or speak about so far. One of the biggest problems regarding this issue is that the Penn State football program (and many other athletic programs around the country) has gained way too much power and been given far too much significance. Despite being just an extra-curricular activity at an institution whose focus is higher learning, playing sports is often seen as being more important than getting an education. Coaches are more popular and powerful that the presidents of schools. Players walk around campus as if they can do no wrong. Teachers are coerced into giving certain privileges to athletes so that they can remain eligible for the big game.

We even see this line of thinking occur in the language we use to talk about these powerful athletic programs. As I was listening to sports talk radio in the car yesterday, an analyst was speaking to the drastic decline that is occurring at Penn State. He described the Penn State football program as once being 'hallowed,' in contrast to their current lowly state. This is a word that is often used to describe storied athletic programs, but this word choice is incredibly fascinating. In normal, everyday conversation, the word 'hallowed' means something that is held in high regard, but in the church we use this word (in the Lord's Prayer) to mean 'holy.' Perhaps this is the meaning, however, that is often intended for these athletic programs. We see them as holy. As perfect. As incapable of disappointing. These coaches and players are gods among men. And when they are in the wrong, we are quick to sweep their transgressions under the rug in an effort to maintain the status quo...to appease the gods.

It's tragic...and it leads to an environment where abuses are ignored in order to protect the powerful and sustain the monster that has been created. Perhaps if anything good can come from this horrific situation, it will be a re-examination of the value and significance we place on athletics in our country. As an avid sports fan myself, I highly encourage athletic participation and fan-dom, but I desperately hope we can still see sports as entertainment, as a game. These athletes and coaches are not gods. They are not above the rules. They are not beyond reproach.
Posted by Jason Bowker at 8:29 AM